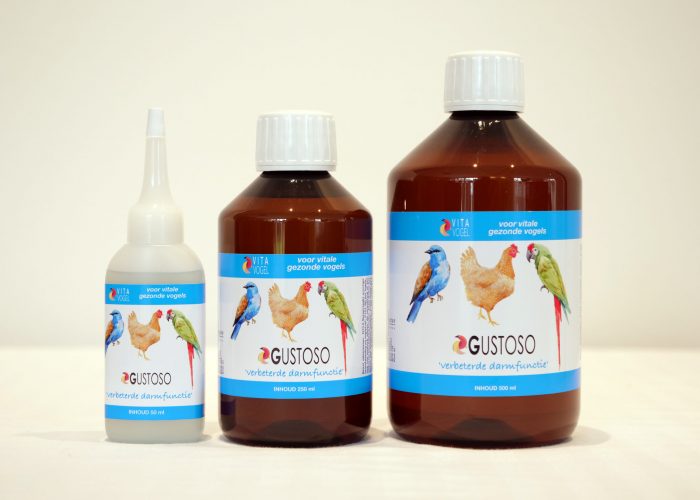 Gustoso for a better gastrointestinal system

Gustoso is an acidic mix based upon the synergetic combination of buffered organic acids such as formic acid, lactic acid, acetic acid, propionic acid and ascorbic acid. Also, Gustoso contains the trace metals copper and zinc. Gustoso can be dissolved in the water supply.

The effects of organic acids, and copper and zinc chelate

Organic acids contribute primarily to the excellent health and growth of birds. Lowering the pH value of the gastrointestinal system inhibits the potential growth of pathogenic bacteria and improves protein digestion. The antibacterial effect of organic acids is evident in both the water supply and the gastrointestinal system of the bird. With birds, this happens mainly in the crop, proventriculus, gizzard and the duodenum. Copper and zinc both play an important role in many bodily processes. The advantage of chelated minerals, as opposed to other kinds, is that chelated minerals are more easily absorbed.

How does Gustoso work?

Gustoso can be administered preventatively for a proper intestinal function and to support protein absorption in the gastrointestinal system. Gustoso can be used curatively after vaccination or the administration of antibiotics. Gustoso also contributes to a smooth, shiny and complete plumage.

Curative usage: 15 ml Gustoso per 1 litre of drinking water, during 3-14 days. Alternatively, 15 drops per drinking bowl. The dosage depends on the pH of the water after product addition. The pH of the water supply should be below 4; that’s when the growth of bacteria and other microorganisms is inhibited. Preventatively, Gustoso can be used continuously, we recommend using it 5 days per week.